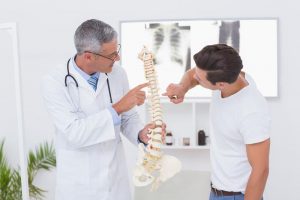 These days, chiropractic care seems to be taking off for those who want a natural, non-invasive treatment technique for certain medical problems. However, the term ‘chiropractic’ actually has Greek origins; ‘praktos’ (‘done’) and cheir (‘hand’) were merged together with an original meaning of ‘done by hand’.

At the beginning, Daniel David Palmer (DD Palmer) noticed how there were no scientific principles or structures relating to chiropractic manipulation despite the practice being used for many centuries. Over time, the system, laws, and rules of chiropractic were written and it became an art, a science, and a philosophy all in one.

After seventeen years of struggling, one janitor went to see Palmer after feeling something give in his back (this eventually affected his hearing). In September 1895, Palmer located a misplaced vertebra and attempted the first adjustment; the patient noticed an immediate improvement in his hearing. From here, Palmer continued to develop the science and the Palmer College of Chiropractic was launched just two years later (originally named the ‘Palmer School of Cure’).

In the coming years, Palmer and his science grew in popularity and Bartlett Joshua, his son, even become an early student. In 1913, chiropractors could be licensed under state law for the first time; within 18 years, 39 states allowed chiropractors recognition under law.

According to recent statistics, 70,000 active chiropractors are spread out through the 50 states that now recognize chiropractors as legal medical professionals (as well as the US Virgin Islands, the District of Columbia, and Puerto Rico). Although chiropractors aren’t regulated all around the world, there is recognition for the profession in the UK, Australia, Mexico, Canada, Switzerland, and Japan.

From humble beginnings, the science continued to grow and the reason our chiropractors in Pompano Beach are allowed to excel is all thanks to the hard work of DD Palmer.